Celtics: Are More Trades on the Way?

Just over a year ago, Danny Ainge, the Celtics’ Director of Basketball Operations, was putting the finishing touches on a deal to acquire PG Gary Payton from the Los Angeles Lakers. The plan was to add veteran presence to an immature locker room, while also allowing him to mentor some of the younger players, in particular guards Delonte West and Marcus Banks (after being dealt back to Boston). Ainge envisioned Payton sticking around for one season, serving as the catalyst of a young team, and eventually handing the reigns over to a more than capable West and/or Banks. And while that twelve-month design appeared to be executed flawlessly, last night’s acquisition of Dan Dickau from the Hornets signifies a much different feeling from Ainge. What was likely to be a healthy competition for starting point guard duties this fall, has suddenly transformed into an intense battle. Fortunately or unfortunately, depending on how you look at it, this isn’t the only logjam on the Celtics’ roster today.

On the night of the 2005 NBA Draft, Ainge had less than high hopes off bringing home an impact player with the 18th pick. A European to stash overseas for a few years would have probably made the most sense, especially with five players already on the roster from the past two drafts. But by the time David Stern announced the 17th selection, the same guy that Ainge contemplated trading Paul Pierce to the Blazers for, the one who was supposed to be the next Tracy McGrady, was still sitting patiently in the Green Room (no pun intended). Nowhere in their wildest dreams did Boston envision nabbing a player of G/F Gerald Green’s ability at 18, but there he was for the taking and Ainge wasn’t going to pass him up. When the fog finally cleared from that eventful night in New York, not only did the Celtics land Green in the first round, but they also brought home SF Ryan Gomes (left), a player projected by many to go some twenty to thirty spots higher. Boston had to feel like a kid on Christmas morning who got all the toys he asked for and then some. Sticking with the Christmas analogy, the Celtics are currently left with the predicament of choosing between which toys to play with now and which to leave for another day, err, another team. You see, Boston already has Paul Pierce logging over 36 minutes a night at the 3, Ricky Davis with 32+ at the 2, and second year players Tony Allen and Justin Reed also vying for PT at the same spots. So the question is, where on Earth does Ainge find time for his rookies, if at all? With his unquestioned impatience regarding the point guard situation, can we assume that Danny will use the same trigger finger to orchestrate a larger deal prior to opening night? If so, should he focus upon a continued build towards the future by moving Pierce or should he stick with his captain and acquire veterans to attempt to build on their 45 wins from a season ago? Let us weigh the pros and cons of both scenarios.

Build Towards the Future 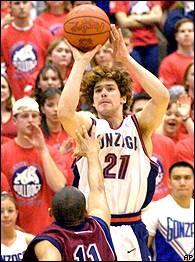 PROS: Thirteen of the seventeen players on Boston’s current roster are 25 years or younger: Allen, Banks, Curtis Borchardt, Will Bynum, Davis, Gomes, Green, Orien Greene, Al Jefferson, Kendrick Perkins, Reed, West, and Qyntel Woods. While guys like Borchardt, Bynum, Greene, and Woods probably won’t factor into Boston’s long-term plans, the remaining players certainly will. A core of Jefferson, Davis, Green, Allen, Perkins, Gomes, Reed, and either Dickau (right), West or Banks, appears to make for a rather promising future for the Celtics and their frustrated fan base. Thus, say Ainge does elect to build around this “core”, realistically what could he get for a package including Pierce? Along with “The Truth,” Danny could incorporate a player from the “core”, one from outside the “core”, a first round pick from the Lakers, as well as either Mark Blount or Raef LaFrentz (for salary purposes, if needed). While I could delve through countless trades proposals that would make sense for both parties, I’ll leave it to you to ask yourself what player(s) would be untouchable with an outgoing package of say PP, Allen, Woods, LaFrentz, and a 1st? One unhappy guy in particular comes to mind…
CONS: While building around the “core” seems like a nice plan, remember if Danny Ainge decides to part with Pierce, the Celtics would likely be giving up on making the Playoffs for at least two seasons. Now that would be fine if Boston had won a Title in say the past ten years, but unfortunately for them, that has not been the case. For a team regarded as the most storied franchise in NBA history, can the Celtics really afford to make their fans go through yet another rebuilding phase? Couldn’t they do just as well, if not better, building around say Pierce, Davis, and Jefferson? Let’s take a look…
Build Around Pierce and Davis

PROS: We’re talking about a team that won 45 games last season en route to winning their first Atlantic Division title since the 91-92 season. Their leading scorers (not counting Walker), Pierce and Davis, are just 27 and 25 years of age, respectively. Usually a team with two players at this age with promising seasons already behind them, is giddy to see how they will produce in the coming years. But the Celtics, with ownership of more young talent than any franchise in recent memory, aren’t like every other team. But does that necessarily mean they should get rid of Pierce and/or Davis and just assume that players like Jefferson (left) and Green will be able to take over within the next two-three years? Pierce and Davis are already proven commodities in this league and still young enough to reach much loftier goals in the near future. Yes, the Celtics do have quite a bit of young talent, but instead of completely revamping for the future, why not trade some of those lesser-regarded assets and win now and later? What if they could deal Perkins, Allen, and Blount (salary purposes) for Magliore? An All-Star center added to a starting lineup of Pierce, Davis, Jefferson, and Dickau—wouldn’t that be worth the price of those youngsters? A scenario such as this also leaves the future wide open with Green, West, Gomes, Reed, and Banks still waiting in the wings.
CONS: Honestly, I can’t even argue my pro case from above. In conclusion, I think Boston has no choice but to keep Pierce around, let him learn from last year’s mistakes, and prove he can be the leader of this young Celtics team. Even if his proves incapable of doing so, Green and Jefferson are still young enough to assume that role two or three years down the line. Keeping the main parts of the “core” in tact while letting Pierce and Davis run the show (for now) gives the Celtics the best chance at succeeding in the present and in the future. Whatever Danny Ainge decides, based upon last night’s move we can certainly anticipate him shuffling the roster at least one more time before we tip off the new season. Let’s just hope that he doesn’t ruin what appears to be a promising future for these Boston Celtics.