If you guys remember from the spring, I put together a whole mock NCAA tourney with every single college-eligible player enrolled at a university (i.e. LeBron at Ohio St., Luol Deng still at Duke). This is sort of a follow-up to that piece (with another next week to complete the ‘what if?’ trilogy) as I compare what schools would do if they brought back all of their former players to unite as a team. Let’s call it the NCAAA, the first A standing for alumni (although I’m pretty damn sure not all these guys can be defined as “alumni”). You frequently hear announcers discuss which schools have the most alum currently playing in the NBA. I went a step further by determining how these schools would stack up against one another if you brought back every player still on an NBA roster. Some things to consider:

1. North Carolina
The Rotation:
Outlook: When I first thought about putting this piece together, I guessed that UNC would easily take the cake as the #1 team. Upon closer examination, they’re actually not too far ahead of UConn. In the end, the Tar Heels’ versatility, depth, experience, and talent would just prove too strong for challengers.

2. UConn
The Rotation:
Outlook: No other team is as loaded with as many clutch players as UConn (save Donyell Marshall– we’ll never forget those missed free throws against Florida), and nobody has even close to as many sharpshooters as the Huskies. If this team gets hot, forget about it.

3. Duke
The Rotation:
Outlook: People always talk about how Duke players never pan out in the pros, but that appears to be a thing of the past– just look at this team! Coach K could throw a number of different looks at opponents including a defensive-minded 5 with Battier, Brand, and Duhon leading the way, or a full court run-and-gun team with Maggette, Hill, and Jones running foes off the floor.

The Rotation:
Outlook: A bit guard-oriented (like most ‘Zona teams) with a dearth of size upfront to bang with bigger teams. The guards would almost certainly be able to outscore most teams. Who wouldn’t want to watch ‘ole Lute throw Bibby, Terry, Arenas, Iguodala, and Jefferson on the court together?

5. Wake Forest
The Rotation:
Outlook: The Deacons could definitely use some depth, but you can’t knock down a team with this starting lineup any lower. I’m sure the best player in the world Tim Duncan would enjoy playing with the best young point guard in the world, Chris Paul.

6. Kansas
The Rotation:
Outlook: A terrific backcourt with Hinrich and Pierce, and plenty of size to throw at you upfront with Gooden, LaFrentz, Collison, and Simien. Yet because they’re Kansas, there’s just no way they would ever exceed expectations.

7. Kentucky
The Rotation:
Outlook: Like most Kentucky teams, there’s a load of depth, but no real superstar. Who takes the big shot down the stretch? You would love to see Prince with the ball, but I can’t imagine ‘Toine relenting. 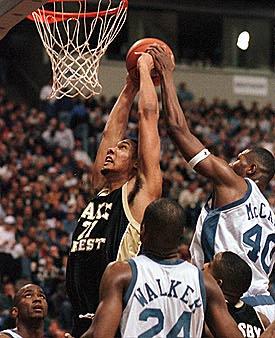 Kentucky has the big bodies down low that would be able to slow down Tim Duncan and the Demon Deacons. 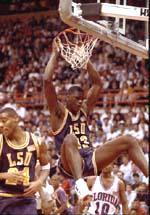 The Rotation:
Outlook: You could pair Johnnie Walker and Jim Beam in LSU’s backcourt, and it would still be near impossible to shut down a frontline featuring Shaq and Stro. This is certainly a team nobody would look forward to playing, but squads like Kansas and Kentucky should be able to outlast them with their plethora of big men.

9. Georgia Tech
The Rotation:
Outlook: Superb balance and plenty of reliable guys to put points on the board. Although I’m not quite sure I’d want Stephon Marbury or Chris Bosh, two stars with losing track records, as my go-to guys.

10. Michigan St.
The Rotation:
Outlook: I like the young core with Richardson, Randolph, and Peterson, and I love the veteran leadership with Willis, Smith, and Snow. Only a team with simply too much talent would be able to knock off the Spartans.

11. Michigan
The Rotation:
Outlook: Three years ago this is a top 5 team, but age would definitely catch up to them. And what the hell kind of surface do the Wolverines play on? There’s more bad knees on this team than diplomas. 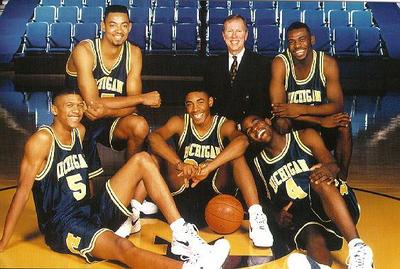 What the hell ever happened to Jimmy King and Ray Jackson anyway?

12. Georgetown
The Rotation:
Outlook: Any team that throws Jerome Williams at the 2 and Othella Harrington at the 3 is scary, for better or worse. Nevertheless, you’re still not stopping Iverson and there’s enough trees down low to finish his misses and keep opponents from strolling into the lane.

13. California
The Rotation:
Outlook: You have to like the duo of J-Kidd and ‘Reef, but the rest of the team leaves a lot to be desired. I thought about giving them Tony Gonzalez since he could possibly be in the NBA if he weren’t the best tight end in the world, but decided it wouldn’t be fair.

14. Alabama
The Rotation:
Outlook: A bit surprising to see Alabama, a school that has never exactly lit up the college basketball scene, this high. Consider that these six guys spent only 3 combined years playing with each other.

15. Cincinnati
The Rotation:
Outlook: There’s no questioning the talent, but now that Huggy Bear is gone, who’s going to keep these idiots from killing each other? 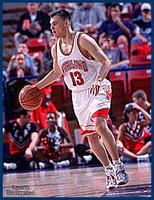 The Rotation:
Outlook: Francis is by far the best of the bunch, but he’s proven in his NBA years that he’s not capable of leading a team to glory. Luckily Gary Williams has 4 players from his 2002 championship squad to help out.

17. UCLA
The Rotation:
Outlook: The Bruins’ program has fallen off since winning the title in 1995 despite still landing blue chip recruits every single year. This squad is decent, but not what you would hope for from the school with the richest history in NCAA Men’s Basketball history.

18. Florida
The Rotation:
Outlook: Anyone else shocked at the amount of white boys on this team? I’ve never noticed that about Florida before.

19. Utah
The Rotation:
Outlook: A quality point guard to lead the way in Miller, a capable scorer from all over the floor in Van Horn, and an imposing low post threat in Bogut, yet there’s absolutely no way this team advances past the Sweet 16. It’s Utah, remember?

20. Syracuse
The Rotation:
Outlook: ‘Cuse is consistently a top 20 team, yet they have just one big time player in the pros right now. This is a testament to Jim Boeheim who fooled a lot of people into thinking Lawrence Moten, John Wallace, and Preston Shumpert were stars. 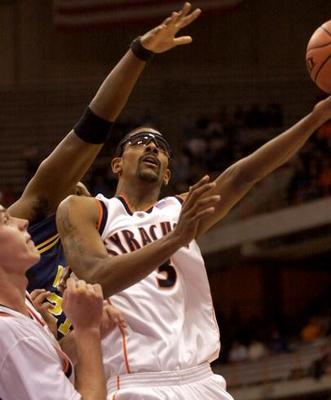 With a name like Preston Shumpert, how could not root for this guy?

21. Stanford
The Rotation:
Outlook: 7 players in the NBA and Brevin Knight is the best they got? No wonder why they can never win the big game.

22. Minnesota
The Rotation:
Outlook: A solid, not spectacular starting five that would I would totally root for although I’m not sure why.

23. Xavier
The Rotation:
Outlook: What does that tell you about the Atlantic 10 when Xavier has more players in the NBA than any other team? I’ll let you figure it out. 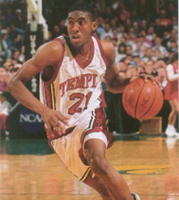 The Rotation:
Outlook: Barely clinging onto their top 25 ranking, if only because that ’94 Temple team with Jones, McKie, and Brunson spearheading the backcourt was badass. How come nobody ever came up with the nickname, "Eddie Jones and the Temple Owls of Doom"?

25. Rhode Island
The Rotation:
Outlook: 3 nobodies to go along with Mobley and Odom is good enough for me. These two missed playing with each other by a single year. Imagine what they could have done inbetween Odom’s bong sessions?
Best of the Rest